Scenes from an Iona Pilgrimage, Sept 2016

1. Blessing the Pilgrims on Radio 4

Sunday morning, 8:10am: BBC Radio 4 broadcast of choral morning prayer at St Mary’s, as Kelvin and Audrey, readers and choir treat us to a pilgrimage-themed service of travel music and celtic blessings and we receive our badges.  Afterwards, we talk to the Mo, the producer, whom we recognize from the last of these broadcasts we attended 9 or so years ago, and Ken, the engineer, who enthuses over his gear and shows us the location of the BBC satellite on his Pokemon-Go-style smartphone app (“22 degrees!” he says).  (Available until 22 October at: http://www.bbc.co.uk/programmes/b07w5zj4 ) 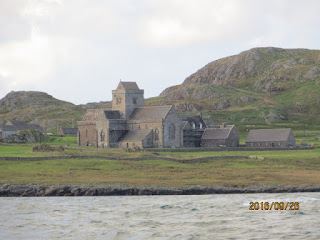 Sunday  afternoon: Having returned home to finish packing and to close things up, we catch the train from Hyndland to Dalmuir, where we pick up the West Highland Line train for Oban.  At Oban we meet up with most of the rest of our group and board the Cal-Mac ferry for Craignure.  From Craignure we take a bus that crosses the island of Mull on little winding one-track roads, before rocking and rolling our way across the sound to Iona. 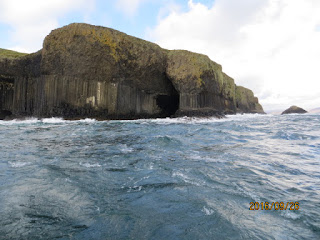 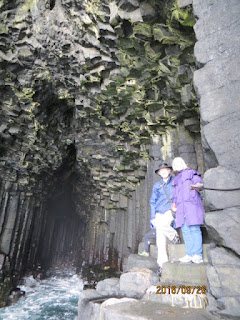 Monday afternoon: The best weather all week was forecast for Monday, so we got tickets for the trip to the island of Staffa, made famous by Felix Mendelsohn’s Hebrides Overture (“Fingal’s Cave”).  The island approached, black and columnar on the horizon, as our little wooden boat, the Iolaire of Iona, pitched and rolled on the rough seas, making it difficult to capture the gaping sea caves cut into the island’s southern cliffs.  Bruce from our church was with us, returning to see the condition of the railing that he had installed more than 30 years ago.  After a rough, wet landing on the lee side of the island, the group of us stepped onto the rough hexagons formed by the tops of the basalt columns that make up the island, created by quick-cooled lava from an undersea volcanic eruption 60 million years ago.  We edged along the path for a couple hundred meters, between crashing waves and basalt columns, extremely grateful for Bruce’s rails, which he told us were made of high tension electric transmission lines.  We edged around the end of the island and into Fingal’s Cave itself, terrifying with the waves booming and roaring.  It didn’t sound like the Mendelsohn piece to me, at least in any literal sense, but it certainly was amazing, and I will remember it for the rest of my life.

4. Geology Pilgrimage into the Deep Time 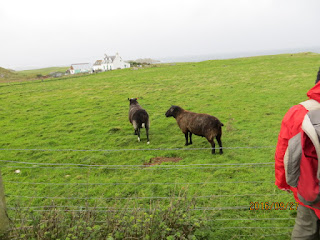 Tuesday afternoon: Alex, a geologist in our community, led a group of us on a geology pilgrimage through Deep Time around the northern end of Iona: We started below the Argyll Hotel looking at a 60-million year old lava channel bored through 800 million year old mudstone.  We then walked up to the machair on the northwest end of the island. Machair is fertile but thin soil on top of raised shell beach sand and looks like a golf course.  It’s several of thousand years old and is on land that used to be beach before the land gradually rose in the aftermath of the last ice age, springing back from the pressure of the kilometer-thick glaciers of the last ice age.  Finally, Alex led us down onto the shell beach (made of finely broken sea shells rather than silicon) just beyond the machair, where he showed us an outcropping of lewisian gneiss.  Lewisian gneiss is some of the oldest, densest rock on earth, more than 2 billion years old: it is the remains of the “roots of mountains”; the rest of these mountains, formed when two tectonic plates crashed together, have long since worn away, leaving something that was too tough even for glaciers to budge.

5. Mindfulness and the Four Elements

Tuesday morning and on Thursday afternoon: Margaret, a psychotherapist/ focuser/research mentor/artist/mindfulness trainer led us in a series of outdoor mindfulness exercises (her specialty).  On Tuesday there was a walking mindfulness meditation through a muddy pasture, and on Thursday there was a standing meditation on the grass between Bishops’ House and the sea, on the theme of the four elements:
• earth: feel the ground under your feet
• water: see the water washing against the shore
• air: feel the wind blowing against your skin
• fire: let yourself experience the light around you and on your skin
This latter led me to some of the most profound experiences I had during our week at Iona:
• Earth: I felt the earth beneath my feet, but after the geology pilgrimage, the stability now felt illusory, until I was able to extend my senses deep into the earth, below the machair, until I reached the stability of the lewisian gneiss, billions of years old.
• Water: The brisk wind had brought a tear to my eye, and I now felt its cool moisture as it evaporated.  I also felt the moisture in the air and the water in the earth. (Iona is the just about the wettest place I’ve ever been to)
• Air: In addition to the wind, I imagined the solidity of air that can hold an airplane up in the sky, and the little molecules of oxygen being transported from the air in my lungs to my blood stream and thence to every cell in my body.
• Fire: I closed my eyes and observed the light coming in through my eyelids.  Then I felt the metabolic fires that energize all of my cells, and the fire of my spirit deep within me, connected to the spirit fires of each of the other people in our little circle.

Wednesday midday:  I love labyrinths, especially seven-circuit Cretan labyrinths like the one on my parents’ property at Murray Creek.  So when I learned that there is one at Columba’s Bay, at the southeast corner of the island, I decided that I needed to go there.  I missed my chance to do it with the postgraduate students, so when a 90 minute window of opportunity opened up on Wednesday, I set off on my own, against Diane’s advice.  A series of things then went wrong:  I was soaked by the rain before I even got to our B&B, which was on the way.  I stopped and changed clothes, putting on my rain pants.  Then I headed west toward the golf course on the machair on the west side of the island, where Kenneth and I had run 8 years before.  Then I turned south, following a rather indistinct track across the machair.  When this ran out, I headed up a rocky, wet path, with a stream running down it, until I reached the little loch near the top.  My maps had gotten wet and were disintegrating, and I knew that I had to go around the loch, so I turned right.  Big mistake!  I was supposed to follow around to the left of loch.  The path soon became submerged in the loch, so I struck out on a way above and parallel to the path, until the path gave out.  There followed a little valley that descended from the loch.  However the valley was essentially a stream, so I was walking through a bog.

The valley descended steeply, and I realized that I did not know where I was and that if I twisted an ankle on the treacherous footing I would be in serious trouble.  However, having chosen this way, I grimly stayed on the way I’d chosen, and eventually saw the sea through the mist.  Descending further I came to a beach.  Was it Columba’s Bay?  It didn’t look right, and by my reckoning I was probably at the southwest rather than the southeast corner of the island.  There was certainly no labyrinth here.  I couldn’t follow the shore to the left because it was too steep and underwater at this point.  Also, I’d almost used up my 90 min window and was essentially lost.  Diane would be worrying about me.  I began to feel foolish and sorry for myself.

Finally, I decided to have a wee reconnoiter.  I ascended the steep slope of the beach, pulling myself up onto machair.  Still no labyrinth.  Then I saw the roof of a house in the distance, and fencing.  Civilization!  Next, I notice the flag marking the number 3 hole of the golf course.  I had somehow gone in a circle and was actually on the west side of the island, much closer to our B & B than I’d realized.  This was at the same time both highly annoying and a huge relief.

As I walked quickly back to the B&B to change out of my soaking, sandy shoes, I reflected on this misadventure and what it said about me:  I sometimes form somewhat crazy plans that I stick to determinedly.  I also have a tendency to strike out on my own, and can find myself in a lonely or even scary place.  And I have been systematically ignoring the fact that I am no longer as limber and resilient as I was 20 years ago, let alone 40 years ago.  Better preparation, better conditions, travelling in company, and letting go of plans that aren’t working:  There are all really good ideas for successful adventures!

Thursday evening: After various more conventional religious services, including compline each night, Wednesday afternoon Eucharist and a healing service at the Abbey, the postgraduate students in our group put on a beer and hymns event, featuring, naturally, hymn-singing accompanied by imbibing beer (and wine). This turned out to be great fun, with our enthusiasm making up for our lack of musical talent, although the hymns could not be delivered at the spritely pace that Diane would have preferred.  At the time, I assumed that only Episcopalians could dream up such a thing; however, I have since learned that it is A Thing, and has an ancient as well as a modern history, going back to the “Hymn for Ninkasi,” the Sumerian goddess of beer. 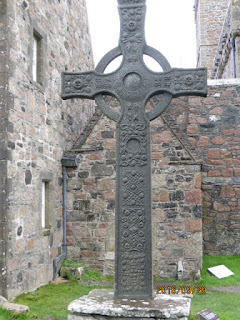 Thursday night:  At the end of our last day, as we headed back on our nightly trek back to the B&B, we stopped, turned off our electric torches/flashlights, and looked up at the night sky, which had cleared for the moment.  Iona has no street lights, so we could see the Milky Way spread out above us, running north-south, the same way we were travelling.  In Spanish, one of the terms for the Milky Way is El Camino de Santiago, also the name of the most famous of pilgrim paths, leading to the shrine of Saint James in northwest Spain.  The Milky Way is a path of stars to guide pilgrims, both celestial and terrestrial, and we were glad to follow it.

Posted by Robert Elliott at 12:40 PM No comments: